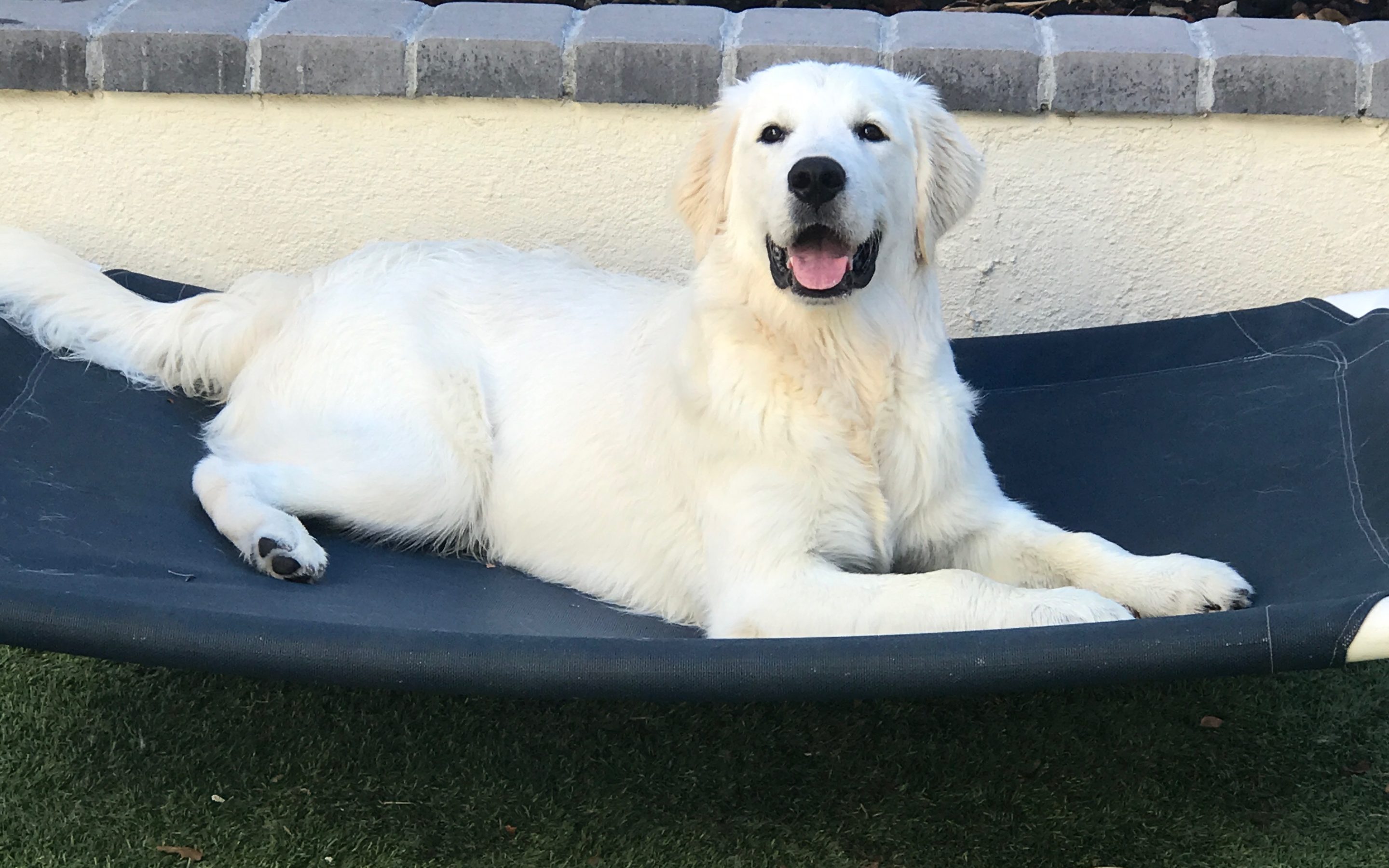 Meet Ozzy! He is an energetic 8-month-old Golden Retriever puppy. Ozzy came to us when he was fifteen weeks old because his family felt he had too much energy for them, and he showed signs of ‘puppy aggression.’ He was too much for their adult dog, who would allow Ozzy to take the dominant role in the pack. While other rescues passed on this kid, WCLRR took him in and started the long process of correcting his bad behavior and teaching him to be a loving, fun dog.

Ozzy loves to run around in the yard chasing a ball or running through the sprinklers. His foster family believes he’d love to have a swimming pool. He will tear the branches of smaller shrubs and chew on them. Therefore, the adopter’s yards MUST be cleared of plants that are harmful to dogs. Ozzy also enjoys lying around and chewing on a Nylabone.

Ozzy’s training started as soon as he arrived at his foster family’s home and learned his place in their pack of seven other dogs. While he struggled initially, the pack sorted him out and corrected him whenever he did not mind his manners.

Ozzy also had a bad habit of biting or lunging at a person or dog if they tried to take away anything he considered food. Toys were ok, but his food was off limits to them, as were things like twigs or rocks. This behavior has been mostly corrected via training with a dog behaviorist. Ozzy learned where his place is in the pack, and bad behavior is not tolerated. This was a huge relief to Ozzy, and the change that came over him was nothing short of a miracle.

Ozzy loves to play chase with a younger dog, and they love to play the game of “bitey-face” when they are in the house. He has made friends with all the dogs in his fosters pack, including two blind Labradors. He is very sweet to them as he is with a thirteen-year-old Labrador.

Ozzy is a kid that loves to be loved and will follow you around to every room, wanting to be with you and play. He has a bad habit of taking clothing or shoes. He doesn’t chew or destroy them but merely takes them as if they are a part of you. While very cute, this habit gets old quickly and could be harmful if he ever decided to chew and swallow the various items.

Ozzy needs to continue his training with our behaviorist so his new family understands how to work with him and be successful in making him the best dog he can be. Due to his nature of resource guarding, he will not be adopted to a family with young children or grandchildren. He would do well in a home with a swimming pool, another dog who is playful but submissive, and a large yard he can run and play in. While Ozzy is fine being left alone for a few hours, his new family should have someone home most days.

Ozzy is up to date on his shots and is neutered. He is also microchipped. There is a training deposit required with the adoption of Ozzy. However, his new family’s consultation with our behaviorist will be paid for by the rescue.