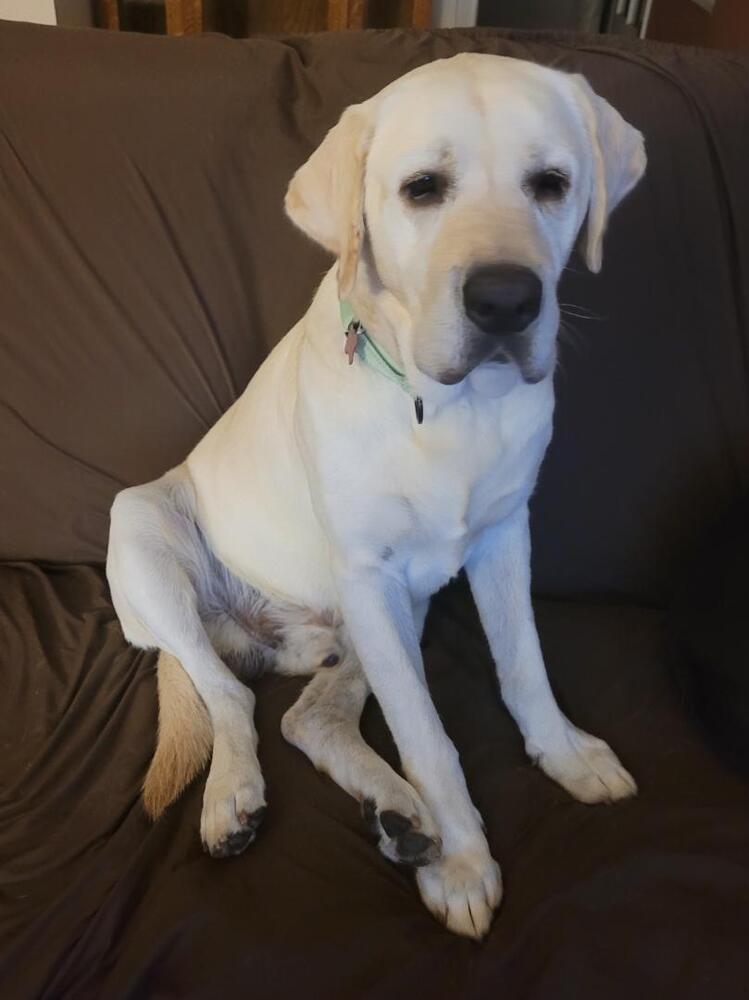 Dillon has the blocky head that is typical of an English lab. However, Dillon’s fur is soft and silky instead of the thick, dense coat that English labs usually have. WCLRR rescued Dillon from a high-kill shelter after he’d been brought in as a stray, and no one claimed him.

Dillon is a medium/low-energy pup that loves human companionship and attention. However, he is very tolerant and easygoing and loves people and dogs. He gets along very well with his foster lab brothers and small dogs.

Dillon doesn’t seem to have had much exposure to toys. He doesn’t know what they are or how to play with them, but his foster is helping him learn. But, of course, his favorite activity is being petted and loved by his people!

Dillon knows basic commands, including “sit,” “stay,” “down,” and “leave it.” However, he is a natural lab to want to be a “pleaser” and responds quickly to corrections.

Dillon is house-trained but was not neutered before coming to WCLRR and has “marked” in the home. He has since been fixed, and his foster is using belly bands and working with him to teach him not to do this. His new family will want to keep an eye on him and continue using belly bands until he is accustomed to his new home.

Dillon is crate trained and happily goes into his crate when asked. He sleeps in his crate in a separate room. Dillon usually wakes between 7 & 7:30 and will bark to let his people know he is ready to get up and start his day.

Dillon hasn’t spent much time on a leash. His new family will need to work with him to learn leash manners.

We don’t know anything about Dillon’s life before he came to WCLRR, but he seems accustomed to getting people food. His foster keeps him out of the kitchen by using a gate. While Dillon isn’t known to counter surf, his new family should keep counters clear of food and dangerous items.

Dillon’s ideal home would be with an individual, couple, or family that will include him in most of their activities.

Dillon is an easy dog to be around and enjoys hanging in the backyard with his people and his foster lab brothers. He is a quiet dog and would probably want a calm home environment. However, he does well in a car, so he would be the perfect boy to take along with you on errands or road trips!

Dillon is neutered, up to date on his vaccines, and microchipped.