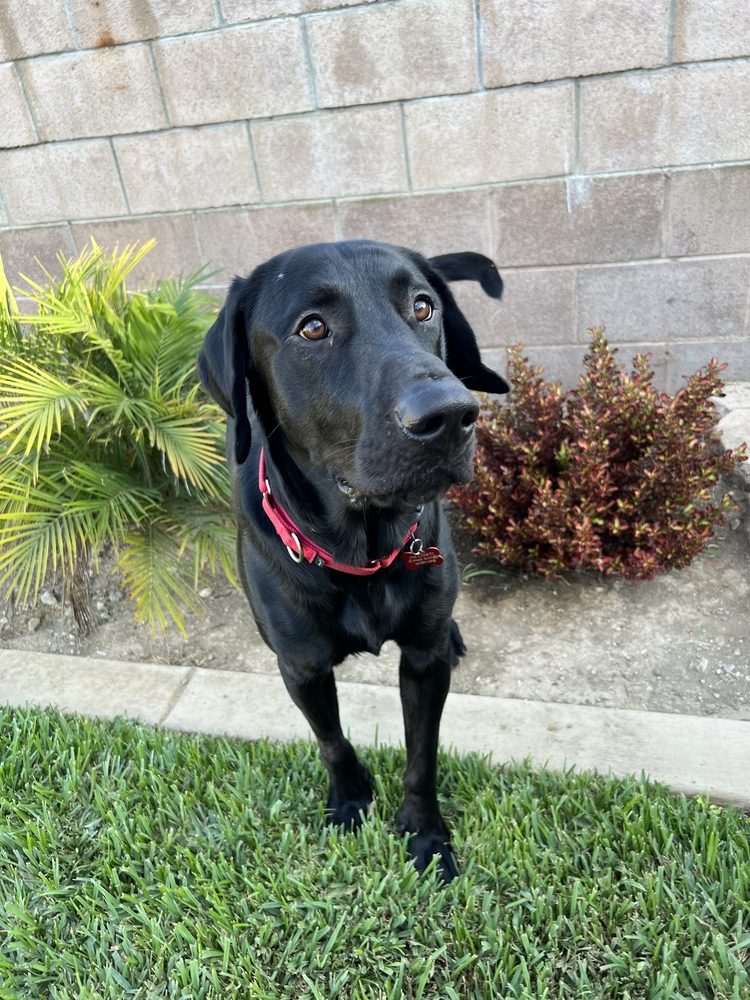 Meet Luke! He is a two-year-old black Labrador Retriever with a shiny coat and beautiful eyes. Luke was surrendered to WCLRR when his owners passed away, and the family couldn’t care for him.

Luke is a high-activity dog. He is a bundle of energy who wants to be involved in whatever is going on and needs a lot of playtime. He has a one-year-old foster lab sister who is his play buddy, and his favorite activity is playing and wrestling with her. They will play tug of war or chase after each other around the yard with a toy. When he’s relaxing, he likes to chew on Nylabones. However, Luke knows when to be calm too. There is a small deaf dog who does not hear growl cues, but Luke is very patient with him and will even let the deaf dog take his toy or bone. In addition to the three tiny dogs, Luke lives with a cat and does very well with him. They mostly ignore one another, but the cat does not appear concerned when Luke wants to get a sniff.

Luke loves attention from his people but is shy when meeting new people. He will go to his crate when people come into the home. His foster leaves the crate door open, and when Luke feels comfortable, he will come out to say hello. He is okay with adults and has met older kids with no problems.

Luke is house-trained and has mastered the dog door. He is crate trained, and that seems to be his safe space. Luke sleeps in his crate at night until his foster gets him out in the morning. He loves to do stretching exercises while getting out of the crate like he has all the time in the world to wake up! Luke is used to being in his crate while his foster is at work, although the foster does come home several times a day to let him out.

Luke could use some training on leash manners. He is powerful and tends to pull on the leash. His new family will want to work with him to make walks more enjoyable for everyone.

Luke has had occasional accidents in the house, and his foster family takes him out in the backyard every hour or two. Unfortunately, he also will chew on things when he gets bored. His new family will need to work with him on this, giving him appropriate chew toys, keeping an eye on him, and limiting his access to the house until he learns not to chew.

Luke’s ideal home would be with an active individual, couple, or family where someone is around most of the time to spend time with him to play and work on training. In addition, Luke would do well in a home with one or more dogs of similar size as playmates to help him use up that puppy energy!

Luke is up to date on his vaccinations, neutered, and microchipped.