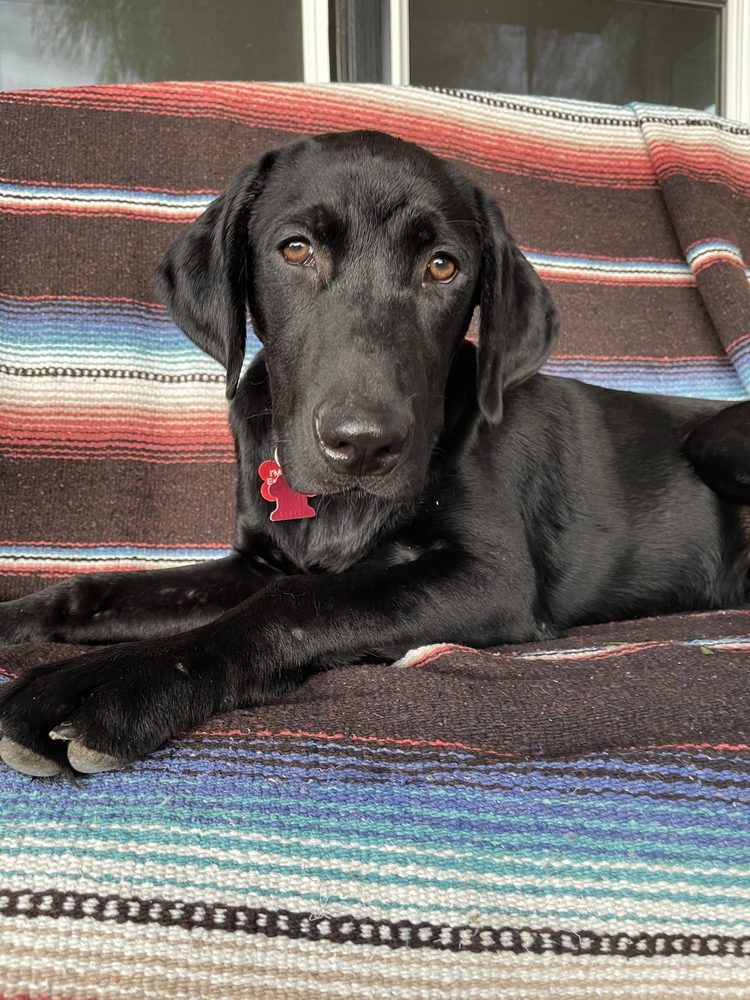 Meet Dex! He is a six-month-old male black Labrador Retriever mix with a soft black coat and big paws that he’s still growing into! Dex was surrendered to WCLRR when his owner had an accident and surgery that left him unable to care for Dex during the recovery period.

Dex is a medium-activity dog that loves going on walks, hanging out at the park, and car rides! He enjoys playing fetch and playing with his toys. Dex loves to run around the yard and will start hopping around if he is super excited! He is still a puppy and learning about the world around him and will do things like bark at his reflection in the mirror. He requires attention and playtime but isn’t a high-energy dog. He will calm down and cuddle with his person on the sofa when it is time to chill out.

Dex is shy when first meeting people but is very friendly and warms up to them after a few minutes. He tends to become comfortable around women more readily than men. However, he has not been around children.

Dex has a calm older female foster sibling, and the two get along very well. He is fine with other dogs but can get overwhelmed when introduced to new dogs. A slow introduction to other dogs will help Dex feel comfortable and engage in play. Dex also lives with three cats and is very friendly with them.

Dex knows how to sit when asked and will stay until he gets the signal to be released. When playing with a ball, Dex understands the command to back up. Dex also knows to sit down to have his leash clipped on. He does tend to pull on walks and will need some training in leash manners. His foster is teaching him to come when called. Dex is food motivated and loves treats, which can help during training.

Dex’s foster has been working with him on house training, and he’s doing great! He’s had a few accidents in his foster home but is learning that he is supposed to potty outside. He has learned the command “go potty” and responds to it. Dex’s foster takes him out frequently during the day for potty breaks and is teaching Dex to wait by the door to go potty.

Dex is crate trained and does not have accidents in the crate, but he does not enjoy being there. Sometimes he will bark if he’s in the crate and can’t see his people, and he will not usually walk into the crate on his own.

Dex sleeps quietly through the night in a crate in his foster’s bedroom. However, he generally wakes early and will start moving around to let his people know he needs to go outside.

Dex has been known to counter surf. His new family should keep counters clear of food and potentially dangerous items such as medicines. Dex occasionally jumps on people when excited, so a home with older children or teens would be best for him. Dex likes to hide his favorite items to keep them safe. These treasures include toys, bones, socks, shoes, and household items such as towels.

Dex’s ideal home would be with an active individual, couple, or family that will give him the training and guidance he needs. Dex is sensitive and still learning, and he needs reassurance and guidance to build his confidence. In addition, a home with other dogs would give him companionship and playtime.

Dex is up to date on his vaccinations and microchipped. However, is not neutered and will need to go out on a “Spay/Neuter” contract. A WCLRR representative will explain the process to the family.